You thought I fell off the bandwagon, didn’t you? I didn’t… I just haven’t written about anything mainly because I’m lazy and partly because I wasn’t feeling creative or witty and reading a noncreative or witty blog just isn’t as fun. Anyway, last Thursday Lindsey and I hit up a few watering holes in Peoria Heights.

What started as one quick drink turned into a mini bar crawl. Linds and I first met up at Tavern on Prospect.

We ordered a drink while we discussed life, liberty and the pursuit of happiness. 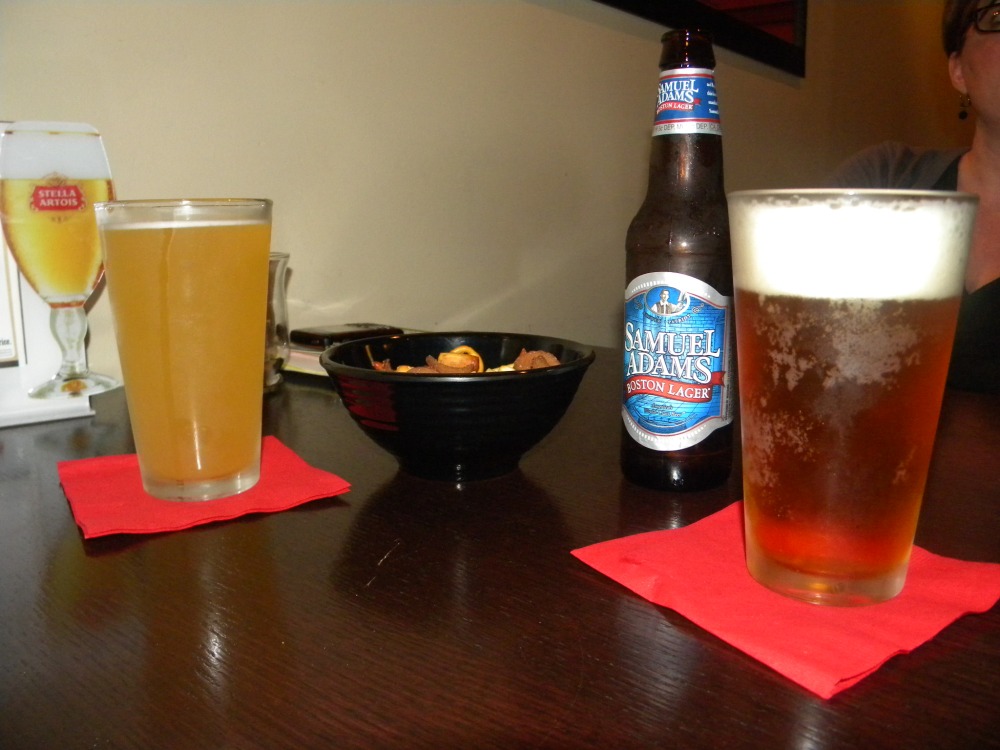 You can’t tell, but that little bowl is full of Gardetto’s–it was the perfect pairing with our brews. I got a Summer Shandy and Linds drank Sam Adams. To be honest, we weren’t really feeling the over 40 crowd at the Tavern…maybe it was too early in the night (7pm) or Thursday just isn’t a bumpin’ night for them…either way, we decided to roll out and head down the world’s most beautiful drive to Publik House (also located on Prospect, if you didn’t catch that).

I didn’t get any outside shots of Publik House–think fire engine red and old skool Boston. They had a way more interesting selection of beers…also Linds said there food is the bomb.com (I don’t know if she used that reference exactly, but it was something like that) so we also browsed their menu. Check out this interesting beer selection… once in particular stuck out to us. 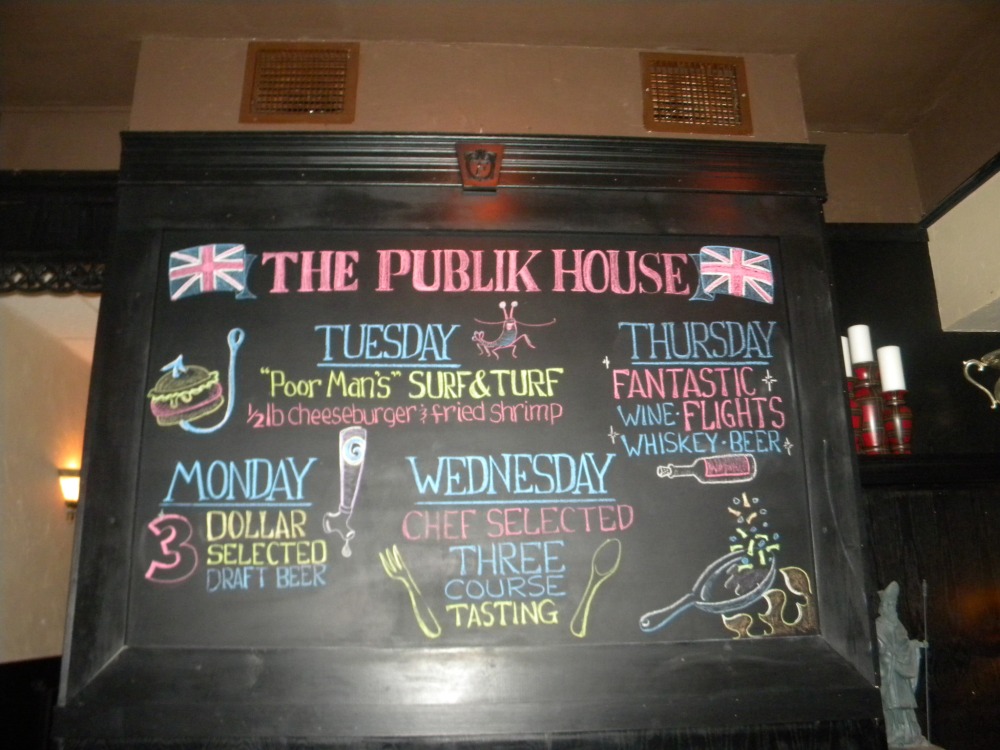 The best part was getting to know the manager/bartender, Bender. (hehe) He’s actually a close friend of my sister and brother-in-law but he was super cool to me and Linds. He let us try a few different beers before we settled on one…including Arrogant B (which we decided we weren’t Arrogant B’s and it was too hoppy)…so we end up with Two Brother’s Domaine Dupage–best part about the beer–it’s locally made (sort of) in Warrenville, Illinois! WIN! And we also ordered the Bacon and Bleu Fries… 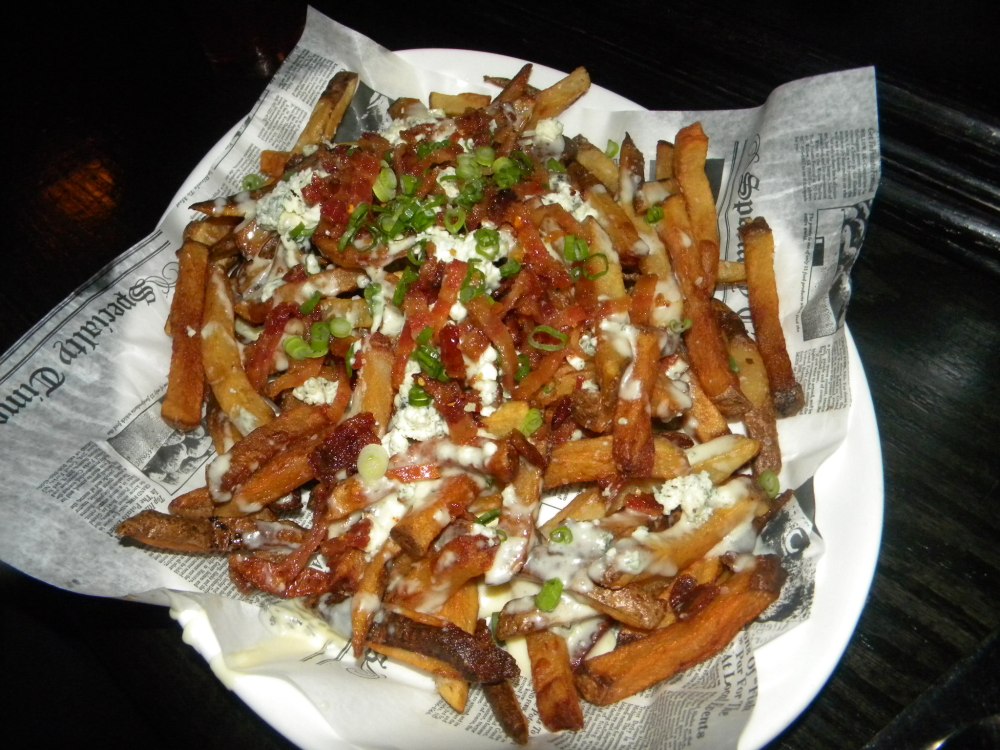 Uhh…YUM. And I’m pretty sure they’re fat free, so that’s also a bonus.

So as Linds and I are minding our own business and admiring the fine mermaid sculpture, we notice Lindsey’s friend Matt and his friend Doug at the other end of the bar! FUN! So we kicked it together for the rest of the night. 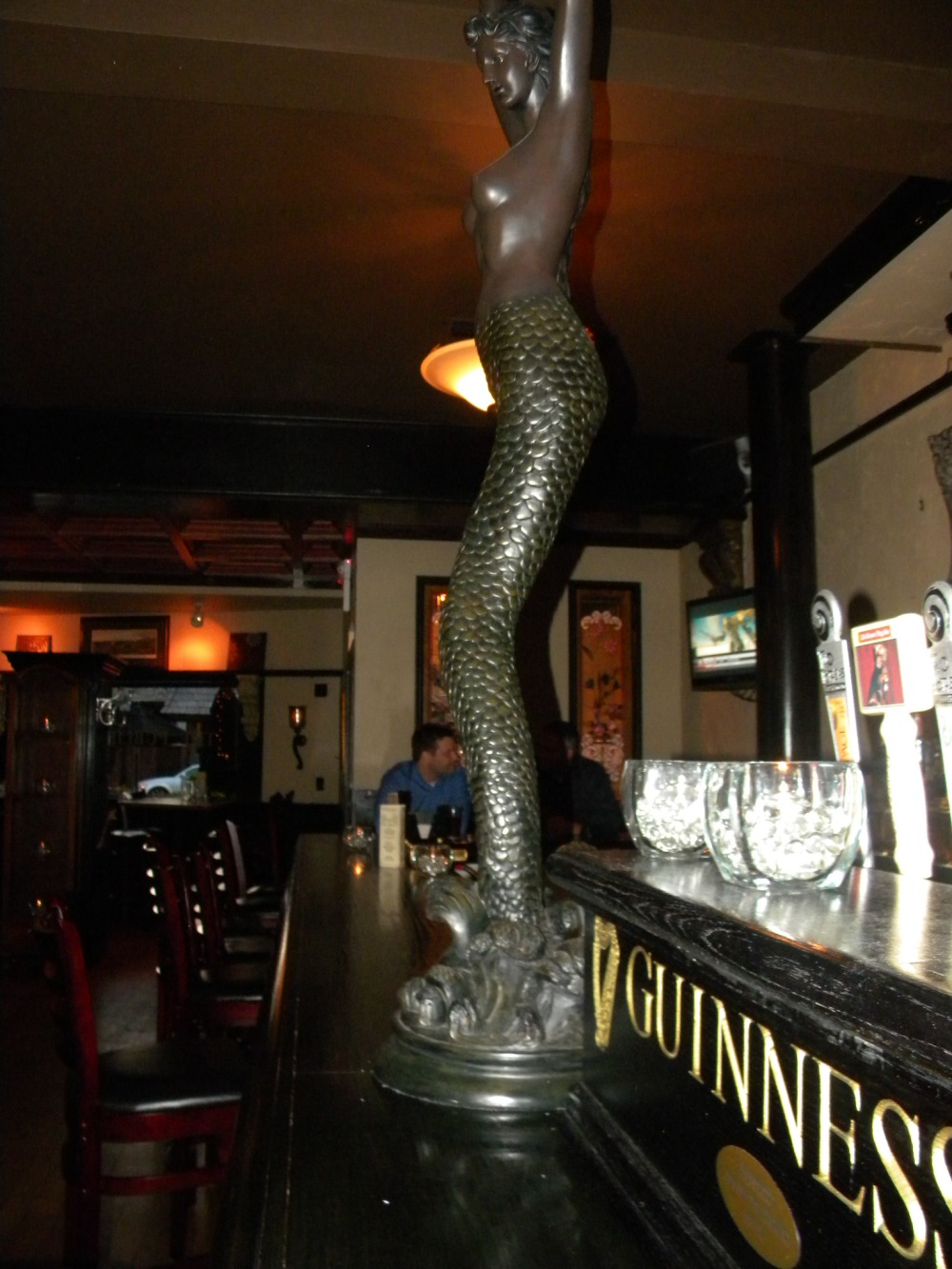 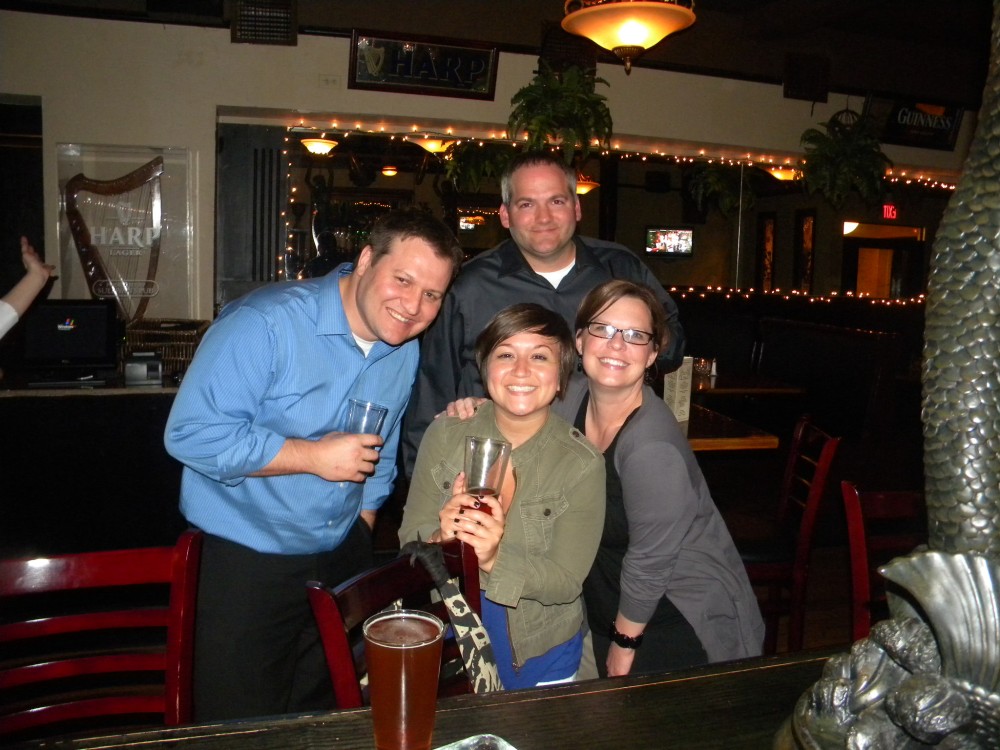 Instant friends. So did we end our night at PH? Of course not, going home is like quitting and quitting is for losers and we are definitely not losers, so we continued our way down Prospect to T-n-T’s! We heard they have karaoke on Thursday nights and while I’m not much of a singer (unless you consider singing a duet with my dad to Jimmy Buffett’s “Why Don’t We Get Drunk and Screw” on my 21st birthday…), Linds has some pipes and she’s been known to sing a mean showtune or two.

And as soon as I walk in, who do I see? Two of my long lost buddies from M-town. Photo op!

I am not actually that tall. They were holding me up to be normal human size. So after I exchanged a few laughs with Joe and Nate, I met my new crew at the karaoke table. Linds was already on deck to sing, but first we had to listen to a few other people “sing” so we entertained ourselves.

This is our impression of the lucky waving cat that Matt bought me recently when he was on a trip to Japan.

And this is us looking normal.

And this is us plus Matt…he just HAD to get his picture with us, what a diva 🙂 (This is a really attractive photo of me and Matt by the way…actually no, Linds is the only one lookin’ fly)

FINALLY! It was time for Lindsey to show the patron’s of T-n-T’s what it means to karaoke!! She nailed “Out Tonight” from Rent. 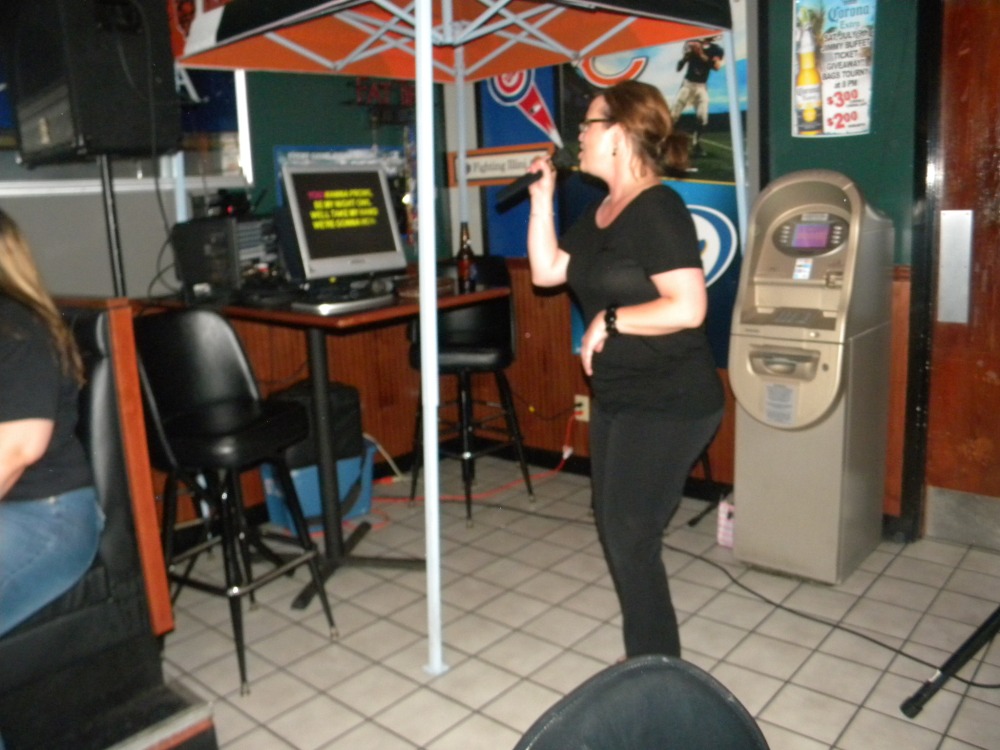 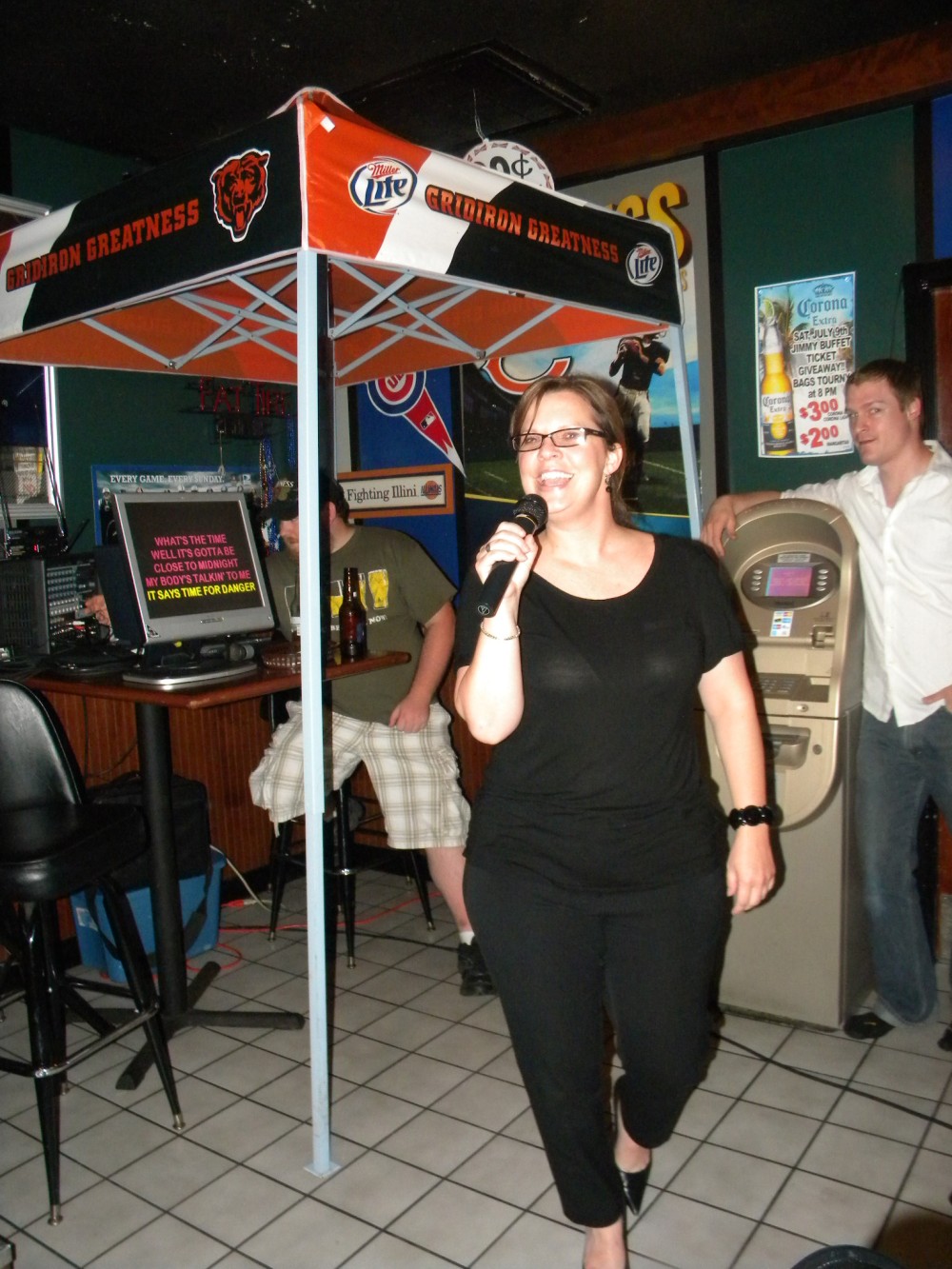 After Lindsey brought down the house, it was time for us to head out. There are plenty more pubs to hit on Prospect–perhaps we will continue the crawl for another slow and lonely Thursday.

Psst! I wish I could give you a cost break down, but I didn’t keep a running tab of things. Sorry!